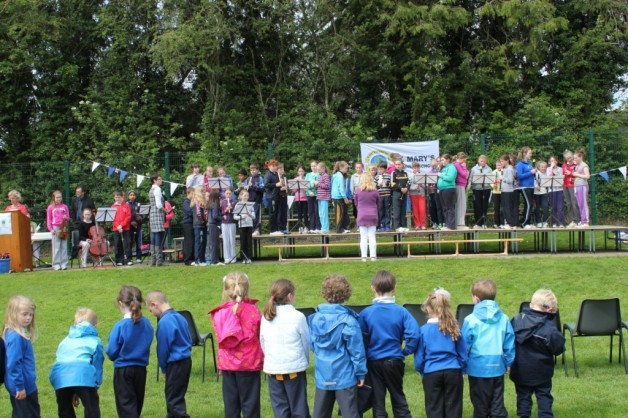 The school opening took place on Friday 22nd of June. Mrs. Walsh commenced the ceremony with a lovely welcoming speech. Then the school orchestra played the recorder accompanied by Catherine on cello. They played two songs ‘La Mourisque’  and ‘Sarabande’. Well done to Ms O’ Shaughnessey for conducting such wonderful pieces of music.

Sr de Lourdes gave a very moving speech about the late Breda Doyle, to whom the garden is dedicated. Following this, the choir performed their first song, ‘Somewhere Out There’. Mr Forristal made a speech in memory of Monsignor FitzGerald recognising the hard work Monsignor made towards the building of our fantastic school.

Fr Dan Bollard blessed the garden and field, while Ms C. Doyle, Gertie, Ms Brennan, Ms M. Doyle and Ms Muldowney said the prayers of the faithful. The choir sang another hymn. Henry Shefflin, Monsignor’s nephew, was also invited to the ceremony. He received a round of applause . The choir then finished with two very well known songs, ‘The Rose of Mooncoin’ and  ‘Irelands Call’.

The children then retreated to their rooms for a party and treats, while the teachers, parents and members of the wider community gathered in the hall for tea and refreshments.

It was a great day.