Home   Parents   The Education of Boys in Thomastown 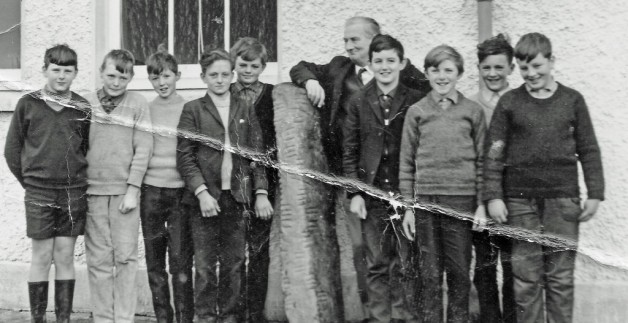 In 1826 there were twenty-four schools in Thomastown parish with a total attendance of 1100 – 695 males and 405 females – of whom all but twenty-three were Roman Catholics. It appears that only two schools were attended exclusively by girls. One was referred to as ‘the Convent’. It was under ‘Miss Fitzgerald and others’ and was situated on the open ground adjoining the present Belfry graveyard. There is no record that this community of women were attached to any recognised order. The other all-girls school was that conducted by Rebecca Cassidy, a Protestant, at Ballydonnell.

A boys’ school operated from a rented room in the Convent. Records indicate that the remaining twenty-one schools had a mixed attendance. In 1839 when the parish undertook to establish a national school the population of the town was stated to be ‘nearly three thousand’ with ‘between seven and eight hundred children … in need of education’. The substantial, two storey schoolhouse, situated on a rock-face at the edge of the graveyard was built at a cost of £800, fully paid for by the parish. Here the boys of the town were to receive their education for the next one hundred and ten years – a facility they shared with the girls until they moved to their new Convent of Mercy school in 1910.

The first principal of the boys’ school was John Walsh who in the late 1840s was appointed principal of the newly-opened Athy District Model School, where he had a distinguished career. Very little by way of records survives from the early days of the school but the earliest surviving inspector’s report, from 1909, is very positive:

I am very pleased with the manner in which this school is conducted. Very good lessons in Arithmetic, Drawing, Singing and Drill were given during visit. An excellent spirit of work prevails.

The report by the Diocesan Inspector, Rev. Thomas Bowe, while overall was positive, suggested that there was still room for improvement: ‘The children made a very satisfactory examination, being excellent at Prayers and Catechism, and very good at Instruction and Bible History. The Sen. Preparatory Class by themselves would not get the highest mark.’ Despite scattered petty criticisms from officialdom, the overall tone of reports, both lay and clerical was commendatory. As time went on, especially after the girls transferred to their brand-new school, all parties were agreed that the school building was no longer suitable for the purpose intended. Initially lack of local finance and, throughout the early decades of the new state, the pressure on State finances, led to a lengthy delay in providing a new schoolhouse. This was finally realised with the opening of Ladywell BNS – Scoil Thobair Mhuire – in 1949, the building where so many of our local male population received their education until boys and girls were once again united under one roof in the amalgamated St Mary’s National School.